Callie Foster came from a rough upbringing. Her past made her the strong woman she is today. Along the way from her time in The Fosters to Good Trouble, Callie had a few relationships that helped shape her to be tough, independent, and caring. Oh, we have also made a playlist to go along with each boyfriend. You’re welcome! Who’s on the list and what songs go along with each relationship? Scroll down to find out! Going way back to the very beginning is Wyatt. Callie dated him when she got out of juvie and then as a rebound from Brandon. Callie went through a lot with Wyatt, like insecurities, trust issues, and even confronting her rape. It’s safe to say the two didn’t work out, especially when Callie found out Wyatt slept with her sister, Mariana. What songs fit their relationship? Check them out below! 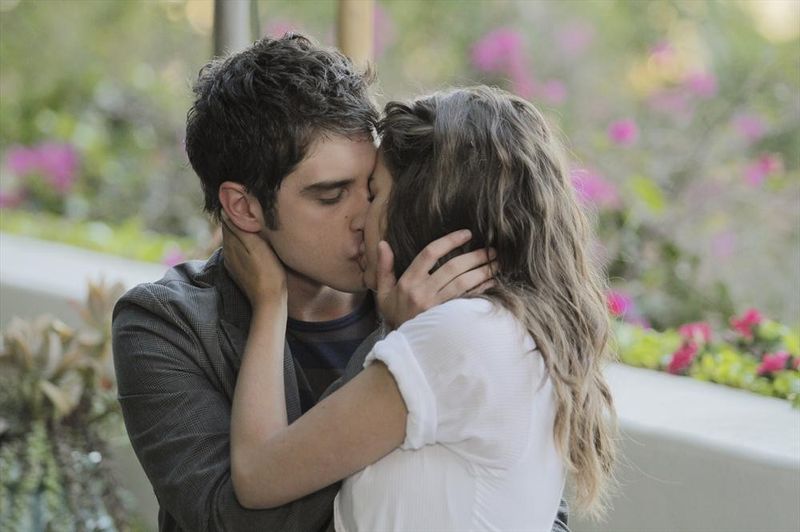 Sweet sweet Brandon. Even though they began as foster siblings, their relationship quickly turned romantic. The two became serious but kept their love a secret in fear of Callie not being able to be adopted. After they officially broke up, Callie and Brandon still shared a few kisses, maybe even more, before they officially became brother and sister. Both from rocky backgrounds, AJ and Callie share a common ground. That’s why they worked out so well. Callie and AJ first met when she was a runaway living on the streets. After a rough start, the two became friends and then fell in love. Callie even helped AJ get into a safer foster home. Everything was going smooth until Callie met Aaron Baker. AJ was clearly the jealous type and lashed out by kissing another girl. Don’t miss the songs listed below that perfectly describe their relationship. As mentioned above, Aaron came into the equation while Callie was with AJ. The two got along well and had a relationship for quite some time. They broke up at some point after graduation, though. We are now entering Callie’s Good Trouble era. Buckle up. Gael was a fellow resident at The Coterie, the communal living place in which Callie and Mariana moved into. They formed a bond and slept together the first night of their meeting. Despite Mariana showing interest in Gael, Callie continued to sleep with him until she found out he was also sleeping with other men. After she speaks with Gael about it, they agree to have a non-exclusive relationship, which eventually falls apart. Last but most certainly not least is Jamie! The two could not be more different as Jamie was in the corporate world while Callie wanted to do the opposite. After moving to LA, Callie and Jamie entered a non-committed relationship while Callie was still with Gael. Then Jamie and Gael both no longer wanted to be non-exclusive, so Callie chose Jamie. The two are taking things slow, but their love for each other is evident.

YEM Author Interview: D.P. Hardwick chats about learning to write from the heart for his book, The Cup