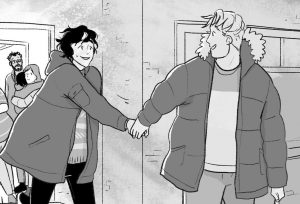 All About the Heartstopper Webtoon

The Heartstopper webtoon is about two high school students, Charlie and Nick, who have been best friends since they were kids. They go to the same school and have the same group of friends. One day, out of the blue, Nick kisses Charlie. This completely changes their relationship and starts a heart-stopping adventure full of ups and downs. The TV show does an amazing job of following the webtoon while also adding its own spin to the story. The actors who play Charlie and Nick are perfect for their roles and have great chemistry together. If you haven’t seen Heartstopper yet, we highly recommend it! It’s the perfect blend of heartwarming and heart-stopping moments that will leave you wanting more. The Heartstopper webtoon has a comic-like feel to its animations and we believe that if you are a fan of the Heartstopper Netflix series then you’ll love the webtoon. Comic book enthusiasts would appreciate the webtoon as it could be viewed as a Heartstopper comic rather than a webtoon if you don’t like that word.

Meet the author of the Heartstopper Webtoon – Alice Oseman

Alice Oseman is a British author, artist, and podcaster who was born in 1994. She is best known for her graphic novels Solitaire and Heartstopper. Her other works include the novel Radio Silence, the play Luna Gale, and the short story collection I Was Born For This. Oseman’s writing has been praised for its honest and accurate portrayal of teenage life. She has won several awards, including the British Book Award for YA Fiction and the Waterstones Children’s Book Prize.

Oseman currently lives in England with her cat, Pepper.

What’s next for Alice Oseman?

Oseman is currently working on a new graphic novel called Loveless, which is set to be released in 2020. She is also working on a TV adaptation of her novel Radio Silence. We can’t wait to see what she comes up with next!

If you are new to the Heartstopper fan club we invite you to learn more about some of the characters to see if it’s a series you are willing to dive into.

Charlie Spring is the main protagonist of Heartstopper. He’s a sweet and sensitive guy who wears his heart on his sleeve. Charlie is struggling with his sexuality and isn’t sure if he’s gay or straight. He has a huge crush on Nick Nelson, but he’s too scared to act on it. When Nick finally kissed him, it was a moment that changed their relationship forever. You learn quickly that he is a bit shy but he is also very kind and caring.

Nick Nelson is the other main character in Heartstopper. He’s outgoing and popular, but he also has a lot of demons. Nick is gay, but he hasn’t come out to his family or friends yet. He’s constantly worries about what others will think of him if they find out. When he finally kisses Charlie, it’s a moment of liberation for him. He doesn’t have the best home life but he tries to make the best of it. Nick is a bit clueless when it comes to relationships but he means well. Tori Spring is Charlie’s older sister. She’s a bit of a rebel and she doesn’t really get along with their parents. Tori is in a relationship with a girl named Elise but she hasn’t come out to her family yet either. She’s supportive of Charlie and helps him through some tough times.

Darren Woods is Charlie’s best friend. He’s loyal and protective, but he also has a bit of a temper. Darren is straight, but he’s very supportive of Charlie and Nick’s relationship. He often gives them relationship advice, even though he doesn’t have much experience himself.

Elijah Warren is Nick’s best friend. He’s the complete opposite of Darren, he’s laid-back and easy-going. Elijah is also gay, but he’s much more comfortable with his sexuality than Nick is. He often gives Nick advice about coming out and being true to himself.

Elias Bouchard is another one of Charlie’s friends. He’s the class clown and always tries to make people laugh. Elias is gay and out to his friends, but he hasn’t come out to his family yet. He’s worried about how they will react if they find out. Elias is also struggling with his mental health, which causes him to act out sometimes.

Tao Xu is Nick’s ex-boyfriend. They dated for a while, but it didn’t work out. Tao is still in love with Nick and he wants to get back together with him. He’s not the best guy, but he’s trying to change.

Isaac Henderson is a new student at school. He’s shy and doesn’t have many friends yet. Isaac is gay and he’s struggling to come to terms with it. When he meets Charlie and Nick, he starts to open up more and becomes good friends with them.

Harry Greene is another new student at school. He’s outgoing and confident, but he can also be a bit of a jerk. Harry is straight, but he’s not afraid to experiment with his sexuality. He often hits on Nick, even though he knows that Nick is in a relationship with Charlie.

Mrs. Nelson is Nick’s mom. She’s kind and caring, but she’s also struggling with her own demons. Mrs. Nelson is an alcoholic and she’s often too drunk to take care of Nick.

Mr. Spring is Charlie’s dad. He’s a bit strict, but he loves his son very much. Mr. Spring is struggling to accept that Charlie might be gay.

Mrs. Spring is Charlie’s mom. She’s supportive of her son and she wants him to be happy. Mrs. Spring is also struggling with her own mental health issues.

Alice is Charlie’s best friend. She is straight but she is very open-minded and accepting. She is always there for Charlie no matter what.

Daisy is another one of Charlie’s straight friends but she is interested in girls as well. Daisy is a bit of a tomboy but she is also very feminine.

Hector is Nick’s best friend. He is gay and he comes out to his friends in the first episode. He is outgoing and always up for a good time. Hector is also very loyal to Nick and will do anything for him. A great character addition the the Heartstopper webtoon and Neflix series.

Michael is another one of Nick’s friends. He is straight but he is open to dating guys. He is a bit of a ladies’ man but he is also a great friend. Michael is always there for Nick, even when things get tough. At the end of the day, if you are seeking a Heartstopper comic then this Heartstopper webtoon will have to do. We can assure you it won’t disappoint.