Singer Kaylin Roberson has had a passion for music since she could first talk.  Young Entertainment Mag reached out to Roberson to discuss her life of music and how personal challenges have shaped her into the young person she is today

YEM:    Who was the first person to recognize your musical talent?

KR:       The first person to recognize my musical talent was my parents. When I was really little I would sing around my house dressed up like a princess, and put on shows for them. They were a little freaked out, but also amazed, that I was singing on key. My mom and dad immediately saw that I had a passion for performing.

YEM:    Has becoming an artist changed your life?  If so, how?

KR:       Turning my passion of music into a career changed the way I present myself to the world. I have to be extra responsible when it comes to the things I do and post on social media, because I have to be a leader for others. I also have the responsibility of keeping my fans on the edge of their seats, by releasing new material.

YEM:    How old were you when you first decided to pursue a career in music?

KR:       I was nine years old when I decided that music was a dream/career that I wanted to chase. I always had a passion to sing and perform, but it wasn’t until I was attacked by a dog, that I realized how much music meant to me, and how important its role was in my life. After going through facial reconstruction due to the attack, I turned to music to give me a sense of hope and strength. Ever since then, I decided to take my music to the next level.

YEM:    Describe the feeling you received when a fan first recognized you in public.

KR:       The first time a fan recognized me out in public, I was at the beach with my friends and this guy followed me about a half a mile down the beach to ask if I was Kaylin Roberson. The feeling I got was unimaginable. It feels great to know that other people are hearing my voice, and enjoying my music.

YEM:    When was your first life performance?  Describe the feeling you received.

KR:       My first live performance was a voice recital in front of my friends and their parents. I sang Adele’s Rolling in the Deep, and my voice almost cracked a few times because I was so nervous. I loved the feeling of performing in front of my family, but I’d never performed in front of a room full of strangers before. It was definitely nerve racking, but the response I got from the crowd when I finished my song, was worth facing my nerves.

YEM:    What was the biggest challenge you have faced and how did you overcome it?

KR:       When I was nine years old I was viciously attacked by a family dog, resulting in endless hours of surgery and facial reconstruction. The right half of my lip was nearly torn off, and the left side of my eye was split open down to my cheek bone. I had over 200 stitches, all located on my face, and had to go back to school just a few weeks after the tragedy. It was hard to be a young girl that loved to perform, with scars on my face. I had to learn how to stop caring what other people think, and just be myself. Music allowed me to express myself in more ways than I ever imagined. 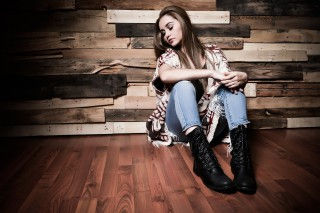 YEM:    Have you personally changed since becoming an artist?  If so, how?

KR:       I’ve seen growth in my leadership skills since I first started. When I first started, I was just singing because it made me feel good, but I’ve come to learn that my music can also make others feel good. I’ve gotten better at using my music to help others. I’ve already helped myself get through hard times, and now I want to help others.

YEM:    What is your favorite part about your career?

KR:       My favorite part about my career is when I see my music put a smile on someone else’s face, who might be having a bad day. I’ve seen that smile come from a hopeless girl in a foster home, to an ill child in a hospital, and nothing can beat that feeling. I hope that I get to keep doing what I love for the rest of my life. I look forward to putting more smiles on more faces.

YEM:    How would you describe your music style?

Through her challenges, Roberson has shown teens across the country the importance of hope and accepting who you truly are, despite other’s opinions.  YEM is thankful to have been given the opportunity to chat with Kaylin and further spread this message to our readers as well!