There’s a young actress named Anna Grace Barlow, and you might not know who she is right now, but don’t worry, you’ll be getting to know her very soon, because she’s about to be EVERYWHERE. Anna Grace (yes, she goes by both names, and what?) is basically the hardest working young actress in Hollywood right now with guest spots on Scream, Faking It, and Young & Hungry. As if that isn’t enough, add this to the busy southern belle’s resume: a role in the newest Ryan Murphy (Glee, American Horror Story) project, the slasher saga Scream Queens premiering on Fox Tuesday, September 22nd. Oh, and that’s in addition to starring in a sweet movie musical called Summer Forever. Yes, a musical. Because not only is this chick crushing all the acting gigs that come her way, she’s also a talented vocalist and musical performer. Boom–actress, singer…is there anything Anna Grace can’t do? We sat down with the Alabama native to find out, lucky just to catch this in-demand it girl in between gigs. Meet Anna Grace Barlow, one of Fox’s new Scream Queens, and the girl from all your favorite shows! Anna Grace is, well, gracious. Seemingly over the moon just to be pursuing her dreams, she’s bouncy and breathless in her enthusiasm. Success definitely hasn’t gone this girl’s head, and it’s refreshing to speak with someone so excited about their body of work. But hey, Anna Grace is still just a southern girl at heart, and wide-eyed enthusiasm is kind of their thing. (By her own admission, you can still catch her saying “y’all” every now and then.) Hailing from Birmingham, Alabama, Anna Grace got her start as a performer early on as a member of the Red Mountain Theater Company in her hometown of Birmingham where she performed in community productions for a decade. But Alabama isn’t exactly known as a bastion of art and culture like say LA or NYC where youth performing arts programs are innumerable, so how exactly was Anna Grace lucky enough to end up Red Mountain? “The story my mom likes to tell is that I used to watch The Parent Trap over and over again, the Lindsay Lohan movie. And I started singing the song ‘L.O.V.E’ [the Nat King Cole song in the opening credits of the film] all around the house. So after awhile of that, my parents, who are doctors, not necessarily theater people, were like ‘Let’s get her into voice lessons!'”

That is how Anna Grace’s performance career began, and the momentum has yet to let up. Even after her time at Red Mountain, Anna Grace sought to continue her performance education. After high school, she headed for The Big Apple, home of Broadway and all her performance dreams, to attend Pace University. In the summer after her freshman year at Pace, she traveled to LA for what was intended as a short trip to make some connections before returning to school, but the trip ended up being a bit more of a permanent shift. She happened to book a role in the Bring It On musical during her LA vacay, and from that point on, it’s been full steam ahead. Scream, Faking It, and Young & Hungry followed shortly, and now the young actress, just barely 21, is carrying a feature film and working with the likes of Lea Michele, Emma Roberts, and Abigail Breslin in Scream Queens. That’s some pretty great company to be in. Emma Roberts, Leah Michele, Abigail Breslin and the rest of the ‘Scream Queens’ screaming away.

Anna Grace gives us the scoop on the bloody Ryan Murphy project and on her Scream Queens character, Bethany. “Bethany is a sorority girl, and she’s really really rude and really mean, and kind of a terrible person.” Bethany and her sorority sisters are a part of a flashback to 1995, a sequence that opens up the two-hour series premiere. Anna Grace is tight-lipped on her character’s fate, saying only “Some pretty terrible things happen in 1995.” Some odd things definitely happen at Kappa House in that opening scene, things that may or may not be connected to a string of murders happening at current day Kappa House where Emma Robert’s character Chanel is Queen Bee, and original gangster scream queen Jamie Lee Curtis is the university dean attempting to thwart all of Chanel’s campus domination plans. Current day Kappa House is plagued by a mystery murderer (or murderers?) in a latex red devil costume who has a penchant for particularly icky stunts, like say, a lawnmower to the face as a murder weapon. It’s not pretty, and neither is C-U Next Tuesday Chanel or her predecessor from 1995, bitchy Bethany. But Anna Grace emphasizes that the brattiness of Bethany couldn’t be further from the warmth and braininess of her Summer Forever character, Chloe. Summer Forever follows three high school best friends on the weekend before they all head in different directions for college once the summer ends. The film is a fun, breezy, summer film that also happens to be a musical, an outlet for showcasing all of Anna Grace’s talents. In the film, the three friends check off items on something of a friendship end-of-summer bucket list, allowing for the normally focused and put-together Chloe to finally let loose a bit. Chloe, as played by Anna Grace, is quirky and awkward, an academic looking to study epidemiology, a stark contrast from hard partying Greek girl Bethany (she really loves her some TLC, “Waterfalls”) in Scream Queens. We’ve got our fingers crossed that Bethany makes it through the slasher carnage of Ryan Murphy’s gory world, but if the body counts on American Horror Story are any indication of what’s to come on Scream Queens, maybe don’t hold your breath. But regardless of Bethany’s future, what’s in store for Miss Anna Grace? She’s looking to return to NYC for stage work. One possibility: Prom Musical from the creative forces behind current Broadway smash Something Rotten! Another possibility, non-Broadway: after a guest spot on ABC Family’s Young & Hungry already under her belt, Anna Grace says of fellow ABC Family favorite The Fosters: “I would kill to be on that show!”

Some other things Anna Grace thinks are to die for: Anna Kendrick (obviously), Katy Perry, and fellow Scream Queen Ariana Grande. As far as other musical tastes, she’s really into California songstress Tori Kelly, melodic pop rockers R5, and indie rockers Walk The Moon. Yes, her musical tastes are super cool, but she also has a confession to make: “I watch a lot of Food Network. I’m such a mom in that way!”

Lol. Don’t be crazy, Miss Barlow. If there’s anyone on the planet who can make the Food Network totally cool, it’s Anna Grace, currently taking over the world one Scream and one stage at a time.

Check out Anna Grace as Bethany in the trailer below! 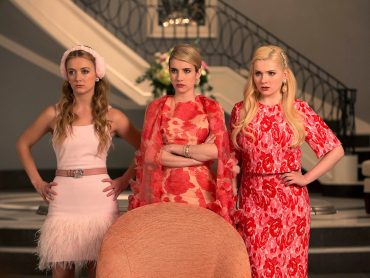 It opened up a whole new level of possibility for broadcast TV — a comedy horror! — but all good things...